The history of this prominent building reflects the fluctuating fortunes of the film industry. The ‘de Luxe’, as it was originally known, opened on 31 October 1924 at a time when silent movies were an increasingly popular entertainment. The first feature screened was ‘The Ten Commandments’. The theatre’s name celebrated the armchair style of seating in the dress circle which offered patrons an unprecedented level of comfort. The owner’s confidence in the future of the film business was reflected in the size of the cinema, which had seating for 1800. 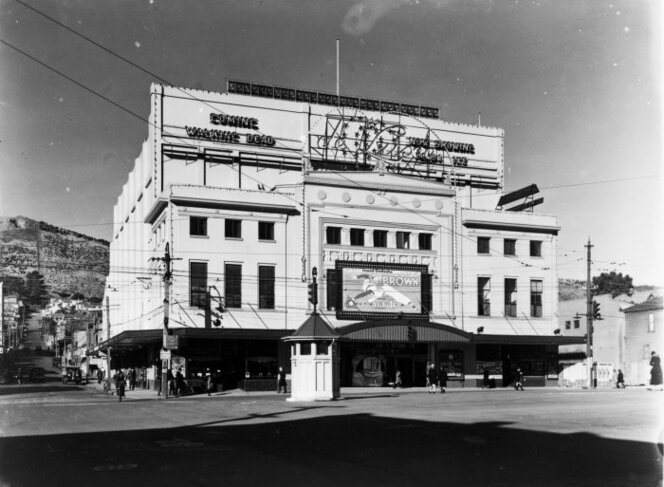 The four-storey building, which also included shops and offices, was designed by Llewellyn Williams for the entrepreneur William Kemball, of Masterton. It was built by the Christchurch contractor, W. Williamson, at a cost of £100,000. It was the largest theatre in Kemball’s theatre empire, and although his far-sighted confidence in the future of film was not misplaced, the debt incurred in building it was to eventually destroy his business.

The cinema showed silent films which were accompanied initially by an orchestra, and then, after 1927, by a Wurlitzer organ. When talking films arrived in 1929 Kemball installed a sound system and his was the first cinema chain operator to show the ‘talkies’, as they were then called. This innovation brought more patrons to his theatres but his personal spending (at one time he owned more than 500 racehorses), and his business debts, were unsustainable during the difficult years of the Depression. By 1945 Kemball had sold his 40 (or so) picture theatres in the lower North Island to rival movie mogul, Robert Kerridge.

The change of ownership brought a new name and the de Luxe became the Embassy. Films continued to flourish, with a weekly trip to the pictures being the cornerstone of the social lives of many New Zealanders. In the late 1960s, however, a new kind of entertainment - television - began to lure the public away. Kerridge was innovative in response and installed a new, wide screen (70 mm - Todd AO) in 1970. However, even the very latest technology could not stem the cinema’s decline, so the following year, the stalls were removed and the downstairs converted to offices.

The loss of the stalls meant that the theatre was reduced in size by approximately 1000 seats. The remaining part of the theatre – the upstairs circle – is still, by current standards, a grand cinema space with seats for more than 800. The grandeur of the cinema, its wide screen, superior sound system and the vestiges of its originally decorative scheme are likely to be the reasons why the Embassy has endured while many other cinemas built in the first half of this century have been demolished. The building is of particularly high status and since 1985 has been the premier venue for the Wellington Film Festival.

In 1991 the building was acquired by Brierley Investments Limited, with the intention of renovating the theatre to provide a home for the Royal New Zealand Ballet. This did not eventuate and the Ballet eventually moved to the St James Theatre – another prestigious WCC owned venue. In 1995 the Embassy Theatre Trust was formed to save and restore the building, and in 1997 with help from the Wellington City Council they purchased the property. Between 1998 and 2003 the cinema was refurbished and partially restored, and the auditorium modernised. The building underwent some earthquake strengthening. In 2004 the ownership of the building was transferred to the Wellington City Council. 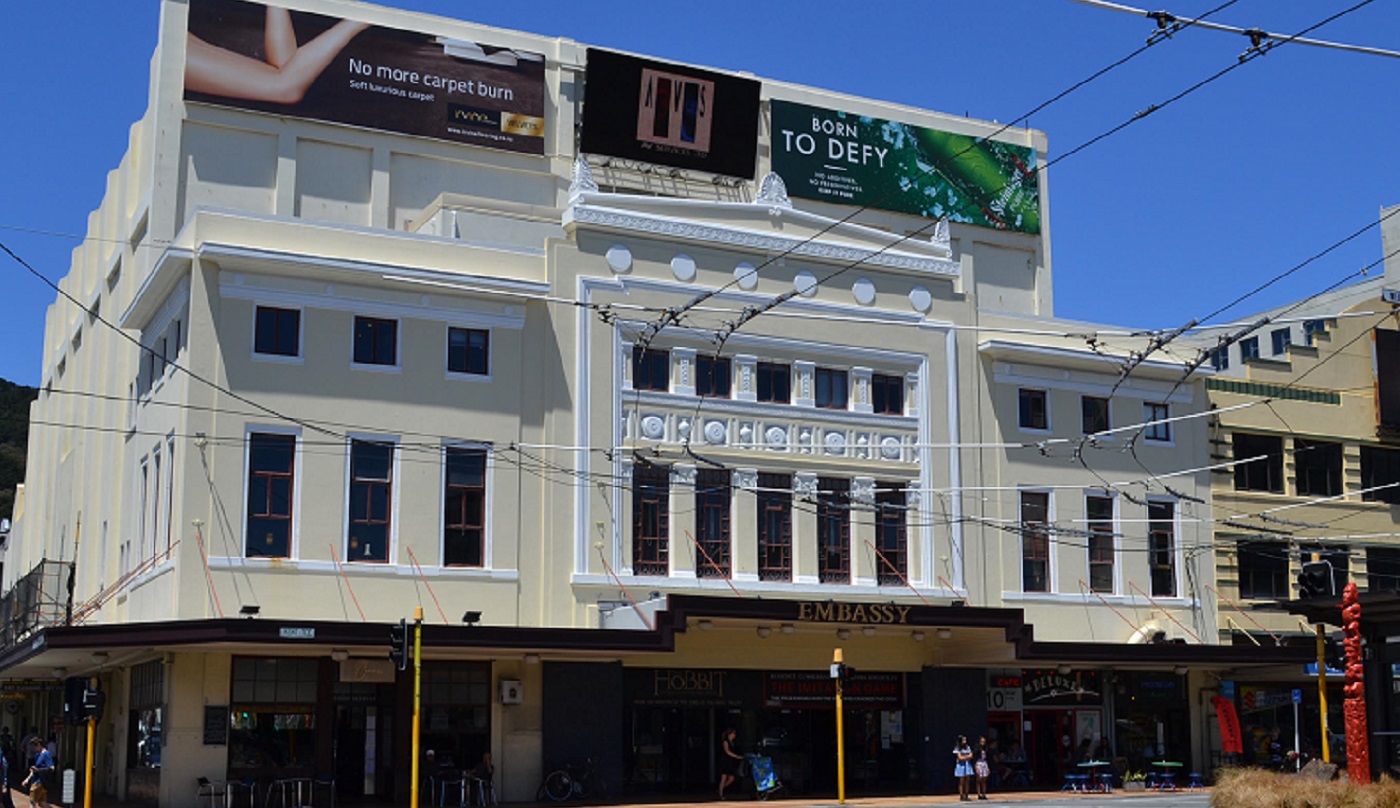 In 2003 the Embassy hosted the world premier of The Return of the King, the final part of Peter Jackson’s Lord of the Rings trilogy. Nearly 120,000 people lined the ‘red-carpet’ route along Courtenay Place, and many more watched the televised procession of actors and filmmakers as they made their way to the theatre for the screening. The cinema also hosted a similar event for the world premier for Peter Jackson’s The Hobbit – An Unexpected Journey in 2012. The Hobbit and Lord of the Rings connection have, to some extent, raised the international profile of the building.

2010 saw the completion of the earthquake strengthening project on the Embassy. The project involved adding concrete ‘shear walls’ in key areas and steel roof bracing above the auditorium ceiling. The project used 72 tons of steel and came in under the $1 million budget.

The Embassy has significant heritage value. As a purpose built cinema of the 1920s it is one of the few large-screen venues to have remained in near-constant use since its construction. It is an important landmark for Wellington, and it is one of the key heritage buildings in the Courtenay Place heritage area, meaning it has high townscape and contextual values as well. The last few decades have seen renewed interest in film. Wellington has seen new cinemas open, and old cinemas reopen, in the central city and the suburbs. Still, the Embassy remains the premier film venue in the city. It is the main venue for the Wellington audience of the New Zealand Film Festival and an incredibly popular destination for regular film going. With the theatre’s prestige high and the completion of comprehensive earthquake strengthening treatment in 2010, the Embassy’s future looks assured.

+ Text Size -
Do NOT follow this link or you will be banned from the site! Original generation time 0.9427 seconds. Cache Loaded in: 0.0213 seconds.