This page, and the accompanying drawings by Perry Architects are a means to explain the refurbishment of the Embassy Theatre.

Rex is on a mission to complete the Embassy Theatre’s intended refurbishment after it was left uncompleted in 2003.

Rex was part of the Embassy Trust formed in 1996, when he was a Wellington City Councillor, which helped save the building and carry out upgrading work on the theatre. He has now made it his goal to see the iconic theatre’s restoration receive the completion it deserves.

The completion work includes replicating the original ground floor facade and beautiful entrance area which was designed by Llewellyn Williams and built in 1924. In addition, vibrant electronic signage will be brought back to the front of the building to enhance Courtenay Place, with a hint of New York’s famous Times Square.

Rex has a track record of restoring heritage buildings around the capital including moving the Shamrock Hotel, Carrigafoyle, and earthquake strengthening and refurbishing CQ Hotels Wellington. He estimates the refurbishment will cost up to $400,000.

Rex says, “No one is going to pay for this much needed refurbishment. Wellington City Council, owners of the building, currently has many other urgent priorities - it will be years before it gets enough around to fixing the Embassy. What I am asking is permission to install large modern electronic signage on the top level of the back wall of the theatre. There have always been large signs on the building. The income from the signs will not only pay for the replication and upgrading but give a permanent income to pay for the long-term upkeep of the theatre.”

Rex’s argument is that the refurbishment is a ‘public benefit’. Therefore, it should be paid for by a ‘public cost’. Generally, payment is expected to be by ‘private cost’, the owner’s.

Rex is currently undertaking the consultation and applying for support and approvals from council. He already has the support of the shop tenants, local property owners, and – in particular and most importantly - Heritage NZ.

What we set out to achieve

The intention is to replicate the original ground floor façade and entrance of the theatre. Though the actual details of the entrance no longer exist we have enough information available about similar theatres to recreate the entrance and the whole Cambridge Terrace facade. There will be only two differences, both of which are to provide for the current mode of use. They are: 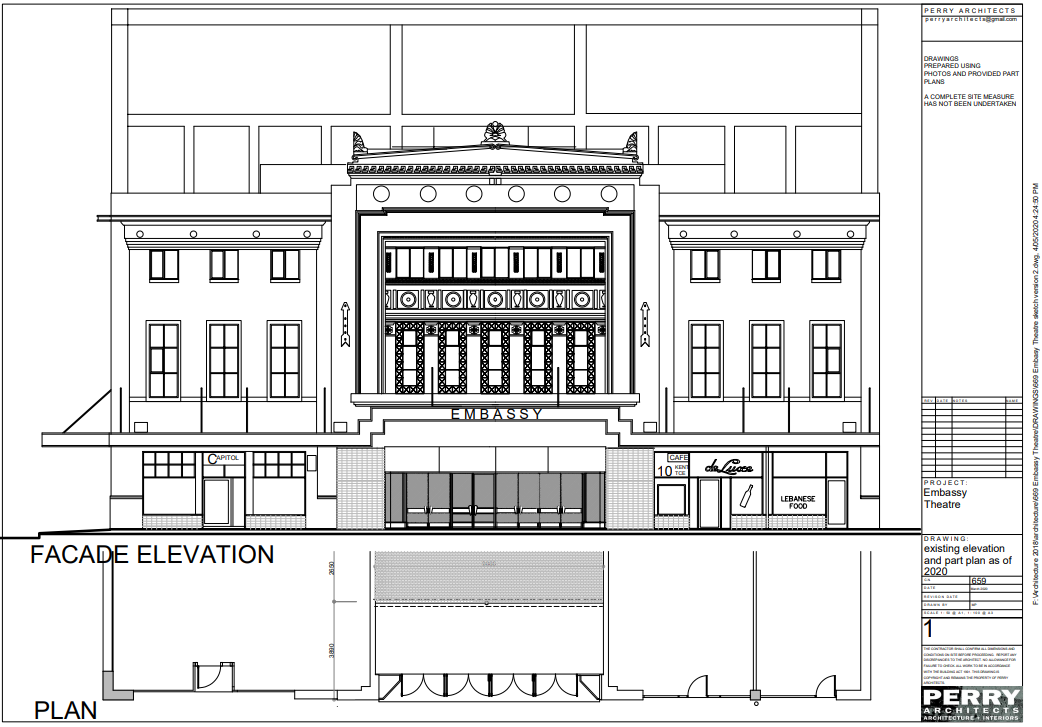 There were several minor details left incomplete during the upgrading and then the strengthening processes 1998-2003. The main one of these is upgrading the lady’s toilets. All of the original details will be reinstated inside the theatre.

To pay for this cost (estimated roughly as $400,000) the trust will be requesting permission to install large modern electronic signage on the top level of the back wall of the theatre. There has always been large signs on the building. This will not only pay for the replication and upgrading but give a permanent income. The income will pay for the long-term upkeep of the theatre. Any surplus will be used on similar buildings in the neighbourhood.

The signage will enhance Courtenay Place. Times Square, New York, is famous for its vibrant electronic signage and we, in our smaller way, can replicate this feel. Courtenay Place needs as much help as it can get. Let’s light it up.

Initially, to begin the process, Rex Nicholls has undertaken consultation and is preparing to apply for  the required approvals himself. However, at the same time a trust, The Wellington Heritage Arts Facilitation Fund, has been set up. It will be responsible for the borrowing, the work, and then the long-term upkeep of this wonderful old theatre.

+ Text Size -
Do NOT follow this link or you will be banned from the site! Original generation time 0.9480 seconds. Cache Loaded in: 0.0451 seconds.